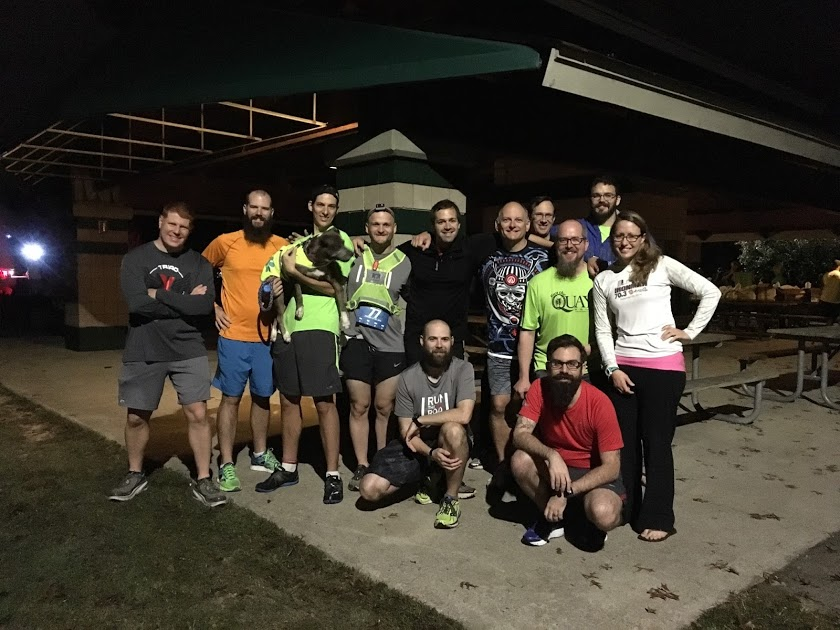 This will be the first time I’ve written a post like this, so if it’s terrible, I’m sorry. This post will be not related to Salesforce work at all so don’t feel obligated to read it if you’re expecting Salesforce stuff.

2016 marks the 3rd year that I’ve participated in the Tuna 200 and the 5th time I’ve done a endurance relay race. I thought I’d take a moment to record how this year’s race went, what worked well and what I would change for next year

The Tuna 200 is a team relay race that goes from Raleigh, NC to Atlantic Beach NC. For those unfamiliar with the layout of the state, it goes from roughly the center out to the coast. The race itself consists of a total distance of 200 miles (322 km) over a total of 36 legs. A team of 4-12 participants will take turns completing one leg and then trading off to the next runner until all 36 legs are complete. Each leg can vary in distance from 2.6mi to 9.9mi. If you have a full team of 12 runners, each runner will complete 16mi (on average). Obviously a team can adjust the amount of distance an individual runner will do depending on their skill level.

The most popular name brand for this type of race is a Ragnar. In my 2 Years of Running post, I mentioned doing the Boston Ragnar from Boston to the end of Cape Cod in 2015. This race follows the same pattern but it not owned by the Ragnar company.

This worked well because it gave each van ample amount of time to actually get food and try to sleep during their down time. Additionally it allowed runners who wanted to get their runs closer together to be able to. And if a runner did not want to run at night, then they could be placed in van 2 and all of their runs could be done during daylight hours. Van 1 was able to get to the #18 exchange very early, get a couple hour nap, leave and eat dinner and return to get some more sleep. This year was the most sleep I’ve ever gotten on this type of race (excluding the Snowmass Trail Ragnar). Van 2 was able to rent a couple of hotel rooms and actually get sleep in a A/C hotel room and even get a shower.

We also took this year to change how we communicated as a team during the race. In previous years we just had either a group text or a person to person text going to keep the other van on track. This year we spun up a slack team and were all communicating in that. It was really nice to be able to share photos as we went but also to be able to talk as a team (tell stories, joke with the other van, etc) instead of having to worry about a text message waking everyone up. The fact that you can set your alert preferences in slack to only make a noise when you are directly mentioned meant that we could talk all the time in there and not worry about disturbing anyone.

For the most part this was the best of the relays I’ve done. All of the problems around the relay really were because of the residual effects of Hurricane Mathew or due to a thunderstorm that rolled through in the late afternoon of the race. We did have one runner have to quit two days before the race, but we were able to replace him and continue on with a full team. If I were to do anything different for the next race, I would pay a bit more attention to the projected temperature and pack accordingly. I found myself needing more warmth while trying to sleep in my hammock because the temp had dropped from mid 70s down into the mid 50s in a couple of hours.